NDRRMC Rainfall Warning Alerts: What They Mean and Why You Shouldn’t Ignore Them Is the NDRRMC flooding your phone inbox with rainfall warning alerts? Does the ringtone almost trigger a heart attack? That’s the National Disaster Risk Reduction and Management Council doing its function as the government’s disaster preparedness arm. Since June 10, the NDRRMC has been sending out weather updates to mobile phone users in the Philippines.

Netizens have taken to social media to post their hugot reactions, ranging from amused and grateful to annoyed. Here’s the thing: regardless of what you feel about the unwelcome barrage of text messages, there’s no stopping the NDRRMC from doing its job. Better safe than sorry, right?

Those SMS alerts you’ve been receiving lately are part of the NDRMMC’s early warning system to ensure public safety and preparedness during disasters, especially in flood-prone areas. Through these text messages, the NDRRMC keeps everyone informed about an upcoming typhoon, heavy rainfall, flooding, or earthquake. When PAGASA (Philippine Atmospheric, Geophysical and Astronomical Services Administration) issues a rainfall warning advisory, the NDRRMC translates it into a short, easy-to-understand message in Filipino and then forwards it to telecommunications providers for dissemination to the public. The Free Mobile Disaster Alerts Act (Republic Act 10369)[1] requires telcos to send out alerts from the NDRRMC and other relevant government agencies at no cost to mobile phone subscribers.

Why do the rainfall warning alerts have to be so loud and panic-inducing, you might wonder. Well, that’s intentional on the NDRRMC’s part—it has to create a sense of urgency. Your phone will ring and vibrate non-stop until you read the messages. The NDRRMC wants you to pay close attention to its warnings, so you can immediately prepare for any disaster, like evacuating your family and parking your car in a safer area.

What Do the Rainfall Warnings Mean? 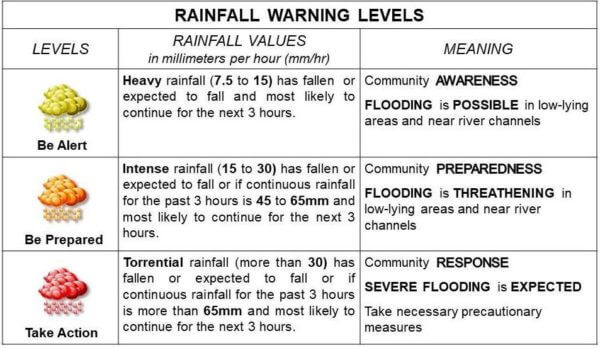 The rainfall warning advisories from the NDRRMC are simple enough to grasp, but what’s the meaning of yellow, orange, and red alerts? These are color codes that PAGASA uses in its rainfall advisories to describe how strong the rains are and how likely the flooding would happen. The darker the color, the more dangerous the situation in an affected area.

What it means: Heavy rains have fallen and will continue for the next 3 hours. Flooding is possible in low-lying areas and near river channels.
What to do: Be alert. Residents in affected areas must monitor weather updates.

What it means: Intense rains have fallen and will continue for the next 3 hours. Flooding is threatening in low-lying areas and near river channels.
What to do: Be prepared. Residents in affected areas must be ready for a possible evacuation due to threats of a flood.

What it means: Torrential rains have fallen and will continue for the next 3 hours. Expect severe flooding.
What to do: Take action. Residents in affected areas must start evacuating. 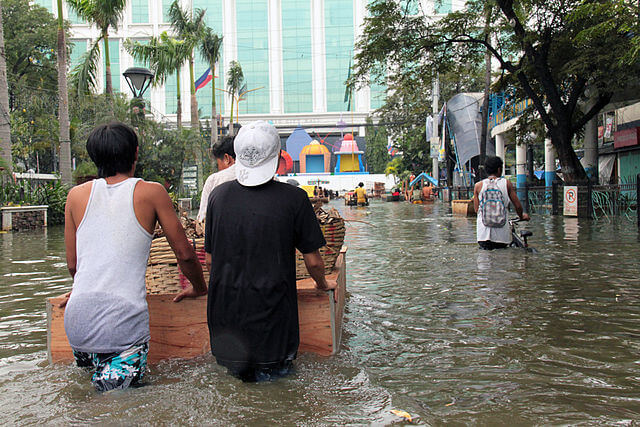 Photo by Department of Foreign Affairs and Trade via Flickr, Creative Commons

The NDRRMC text alerts, no matter how annoying and disturbing they can be, should be taken seriously. Remember how Metro Manila and other affected provinces were caught unprepared during the onslaught of Tropical Storm Ondoy in 2009? Had families received early warnings back then, more lives and properties would have been saved.
While it may be more convenient to just disregard the emergency alerts on your phone, consider what would happen if you aren’t aware and prepared enough for flooding and other calamities. According to NDRRMC records[2], the recent spate of habagat or southwest monsoon has already caused PHP 250 million worth of damage to infrastructure and agriculture in the Philippines. That’s how destructive the weather has become nowadays. Will you just wait until your home gets flooded before you take your family to a safer place?

Filipinos are known—and admired—for resiliency in times of disasters. If we can withstand typhoons that batter our country, do we really have good reasons to complain about simple inconveniences like waking up to loud NDRRMC text alerts?

Remember when your wallet was the most important item in your arsenal of everyday items?…

Another week, another edition of Moneymax Reviews! Let’s leave the budget-friendly credit cards and head…

Where to Buy Face Masks and Face Shields in the Philippines

Face masks and face shields are now part of our daily essentials. Whether you’re out for…