The Anti-Distracted Driving Act: How Helpful Is It in Preventing Road Accidents? The World Health Organization’s 2015 Global Status Report on Road Safety claimed that distracted driving is a “serious and growing threat to road safety.” Drivers who are preoccupied with their gadgets while on the road are four times more likely to get into a crash. Specifically, texting while driving makes a person 23 times more susceptible to accidents on the road. Road mishaps are bound to arise when a driver’s mind wanders off from the steering wheel and away from the act of driving.

While one can drive on autopilot, driving still requires full attention because roads, especially in the Philippines, are unpredictable. That’s why Filipino lawmakers found it imperative to legally prohibit the use of gadgets or any type of distraction while on the road. Hence, we have the Republic Act 10913 or the Anti-Distracted Driving Act (ADDA) of 2017.

The Scope of the Anti-Distracted Driving Act

ADDA encourages motorists to keep their eyes on the road and their hands on the wheels by prohibiting the use of electronic communication devices when driving, regardless of whether the vehicle is in motion or caught up in traffic. Some actions considered illegal are making or receiving calls; writing, sending, or reading text-based communications; surfing the internet; watching movies; playing games; reading e-books; and doing calculations. Drivers can only use their devices when they are safely parked or when using hands-free functions.

This law applies to both public and private vehicles. It also covers construction equipment, agricultural machineries, and other forms of transportation, such as bicycles, trolleys, wagons, carts, carriages, pedicabs, and the like. In other words, it’s inclusive to all types of vehicles operated on public thoroughfares. The only exceptions to this law are emergencies. Drivers are allowed to make or take calls in cases of medical crises, crime, accidents, fire or explosion, terrorist threats, and other crucial situations where a person’s safety is compromised.

ADDA also mandates that the driver’s line of sight is clear and unobstructed, which means that there should be no gadgets on the dashboard or the steering wheel. Drivers can still use navigational apps like Google Maps and Waze, but they should set them up beforehand or pull over when they need to find alternate routes. Other objects not specifically covered by the law include rosaries, dash cams, tachometers, figurines, toys, and stickers, among others. The Confusion Surrounding the Project Implementation

The ADDA was initially enacted on May 18, 2017 but was suspended after a few days due to the confusion that surrounded its implementation. For instance, there was the question of whether rosaries and smartphone clamps were allowed on the dashboard or windshield. Also, some smart alecks questioned whether munching biscuits while driving or talking with friends on the backseat should also be banned because they share the driver’s attention.

After a more thorough review, lawmakers issued the law once again on July 6, 2017. The initial days of implementation were marred with confrontations between motorists and law enforcers because the updated version of the ADDA was still slightly problematic, especially the part where the driver’s “line of sight” was involved.

Understanding What “Line of Sight” Means

The message is generally clear, save for the last few words. Many motorists were left wondering where they could put their mobile devices and dash cams, or if they’re even allowed to install them at all. Luckily, officials from the Department of Transportation (DOTr) clarified this matter by saying that a driver’s line of sight includes the entire windshield and the top of the dashboard, except the area behind the rearview mirror. This is where drivers can mount dash cams. As for the phone mounts, drivers can place them on the instrument panel, behind the steering wheel, or at the center of the dashboard, as long as they are “installed in areas that will not obstruct the driver’s view.” 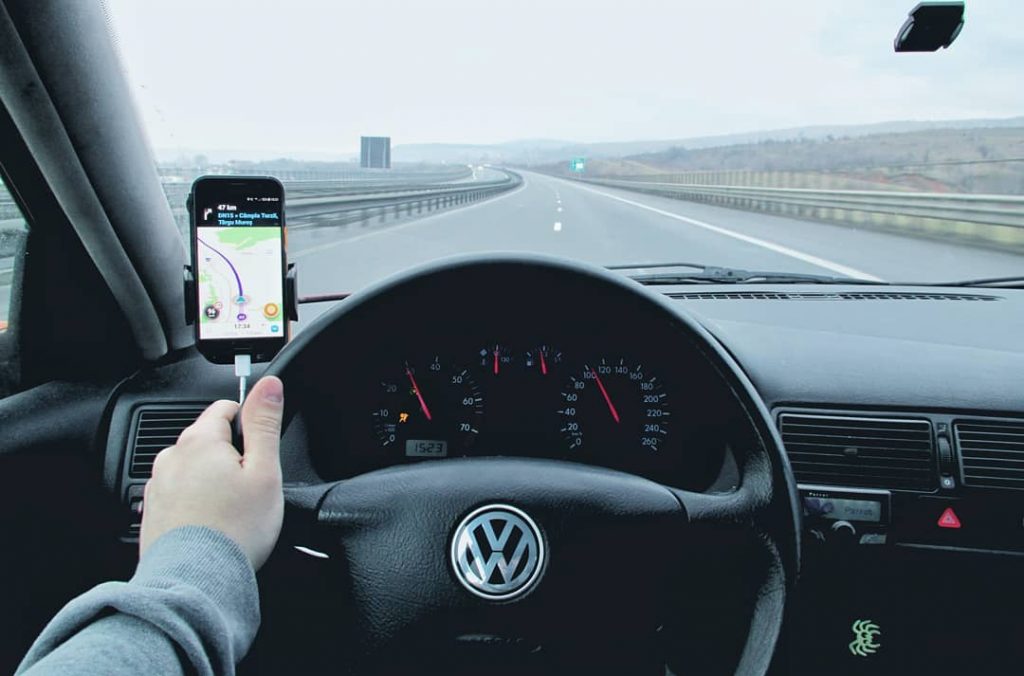 Fines and Charges for Violations

Unpaid fines will reflect on the driver’s records and will impede renewal of his or her license.

Public utility vehicle (PUV) drivers who violate the ADDA within 50 meters of a school will be fined ₱30,000 and have their license suspended for three months. Both PUV owners and operators will share the fine for offenses committed by their drivers unless they can show proof of their “extraordinary diligence in the selection and supervision of drivers in general, and the offending driver in particular.”

Offenders should not pay their dues directly to the enforcer that apprehended them; instead, they should go to the corresponding office that will receive them:

For vehicle operators not required to have driver’s licenses (i.e. construction equipment, agricultural machinery, wagons, carriages, carts, bicycles, pedicabs, trolleys, etc.), violators are issued a ticket and escorted to the nearest payment center to settle the fine. Failure to settle the fine immediately results to the government impounding the vehicle in question. Violators are then given six months to pay their dues. If they fail to do this, LTO assumes the prerogative to sell the impounded vehicle on behalf of the government.

For heavily tinted vehicles, high-definition cameras are put into place to monitor the lights inside said vehicles. Apart from this, enforcers are highly trained to identify from the movement of the vehicle whether the driver is guilty of distracted driving or not. Is the ADDA Effective?

The general public acknowledges the spirit of concern that sits at the core of the ADDA, but many still question the new law’s effectiveness and practicality. For instance, is it better to have the phone mounts installed anywhere else but the windshield? Some people voiced out their concerns, including motoring expert James Deakin, who said that he found it safer to glance at a spot on his windscreen than somewhere on the console. Ram Salome, a shuttle driver, agreed with him. He said, “The law is unclear, and if it is line of sight that is the issue, how about jeepneys and their signboards? Is this not a distraction and interference to line of sight?”

Lawyer Robby Consunji, who is also the former president of the Car Awards Group, Inc. and a columnist at Top Gear, questioned the need for the driving act. He challenged the authorities to present a verifiable data that shows electronic devices are a leading cause of motor vehicle accidents in the Philippines. Unless lawmakers can prove that ADDA is indeed helpful in reducing road mishaps, Filipino motorists won’t fully embrace it.

The government’s increasing efforts at curbing the rate of accidents in Philippine roads are noteworthy. To some extent, the lawmakers have done their part, whether the general public agrees or not. Now, it’s up to motorists to ensure their own safety and that of their passengers and fellow drivers. Unless everyone makes a proactive and conscious effort to make driving safer, Philippine roads will remain untamed and dangerous.

Looking for a financial product? Click the box below to connect with our financial advisors.

Lockdown Boredom Busters: How to Have a Good Quaran-Time

It’s been weeks since the enhanced lockdown was announced and you’re probably bored of watching or listening to the same old stuff you love. Since this whole COVID-19 business isn’t going to end anytime soon, it’s best to try and explore other pieces of media to keep you occupied and sane. Here is a list […]

Infected or not, Filipinos are grappling with the impact of the coronavirus disease 2019 (COVID-19) pandemic in one way or another. Suddenly, the public health crisis disrupted the lives of many—from simple inconveniences like getting stuck in one’s home to more serious problems like the increased risk of coronavirus infection and loss of income. The national […]

Wireless Internet on the Go: 5 Pocket WiFi Options for Filipinos

Battery-powered and fitting in the palm of a hand, a pocket WiFi (also called mobile WiFi) is a wireless router that lets you be connected anywhere and share internet access to multiple devices simultaneously. Although a smartphone can do the same job, using it as a WiFi hotspot can quickly drain the phone’s battery life. […]

Business Loans for Startups in the Philippines

This article was published on June 6, 2019 and was updated on March 30, 2020 Finding good sources of funding is a critical step in starting a business. A small business loan from the government, a bank, or a private lender is one financing option for budding business owners. Business loans come in a variety […]

9 House Cleaning Services You Can Book in Metro Manila

Everyone knows the importance of keeping one’s home clean. The problem, however, is not everyone has time for house cleaning, especially working professionals who live alone in the metro. Even if you or anyone in your household can take on the task of keeping your home clean, there are certain jobs like deep cleaning and […]