The History of Money in the Philippines

When drawing your wallet for a purchase, you might not give much thought to where the pesos in it come from. Sure, from an income perspective, you probably would, but considering their actual history might be another story. What is the history of the Philippine’s current currency, and which payment methods did precede it?

Before delving into the history of the Philippines’ money, it is useful to go a bit into the concept of money itself. What are the main functions of money? You can use it as a medium of exchange, a store of value, or as a unit of account. Possessing certain amounts of it contributes to your capability to choose how you want to live your life. For many countries in the world goes that their national currency is a source of pride and that it is an important and valued aspect of their national identity. So how did the Filipinos fare before the advent of the peso; how did society actually function without it?

Back in the Old Days

Long before the country we live in was known as the Philippines, people were already exchanging goods and services with each other and people from neighboring areas. They did so through ‘barter trade,’ which means that for instance someone would trade a cow or chicken directly for someone else’s knife or hammer. The impracticality of this barter trading led people to assign certain set values to mediums of exchange. As gold was plentiful in the Philippines at the time and relatively easy to turn into desired shapes, bead-and-ring-shaped pieces of gold quickly became the method of payment, effectively functioning as coins.

When the Spanish Entered the Philippines… And left

With the Spanish entered the country in 1521, their silver coin the ‘teston’ became the main Filipino currency, serving as the most important method of trade between the Spanish and Filipinos. During the Spanish regime, the Philippines possessed a melting pot of currencies, which included Alfonsino pesos and Mexican pesos, among quite a number of others. The peso fuerte (or the ‘strong peso’) would become the dominant currency in the later stage of the Spanish colonial period, being the first Filipino currency issued on paper money, and being issued by the country’s first national bank.

After reaching independence from the Spanish in 1898, the Philippines started producing its own currency—both coins and paper money—which replaced the peso fuerte. During this time, the term ‘centavo’ was introduced to name the subdivision of peso coins into cents. After 1901, when the Americans started to take control of the Philippines, this ‘revolutionary peso’ was yet again replaced.

Towards the Current-Day Peso

In the early 1900s, the Americans introduced a monetary system based on gold: the gold peso. They pegged the gold peso to the American dollar at exactly half of its value, and the currency maintained its purchasing power up until 1949. From that moment on, the peso found itself in stormy times. In an act of desperation, the peso got turned into a floating currency in 1964, meaning that its value became a reflection of people’s perception of its stability. 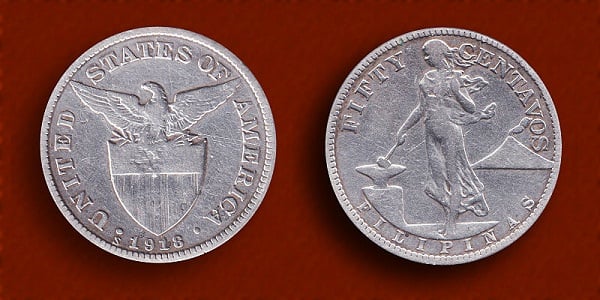 In 1967, the language on all types of peso money got changed to Tagalog. Although in everyday writing the spelling of ‘peso’ still reigns supreme, peso bills since the 1960s display the word ‘piso.’ Likewise, though coins since that time display the word ‘sentimo,’ ‘centavo’ remains of course the more commonly used term. Still, with this act of localization, the Philippine peso has been brought a step closer to our national identity. We will see what the future brings us with regards to developments around the peso.

Read more: Fake Money vs Real Money: How to Know if Your Cash is Legit