The Year That Was: Looking Back on the Most Important 2021 Events 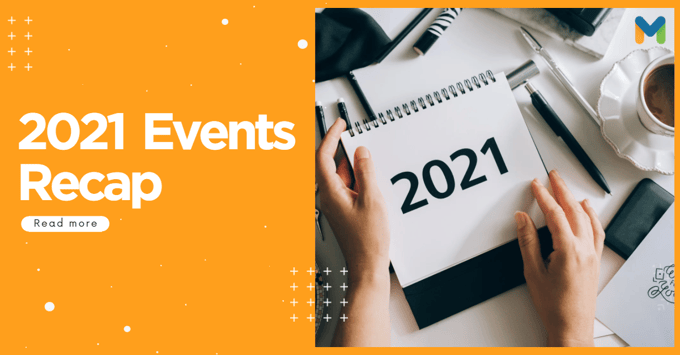 To say that the year 2021 is an eventful one is an understatement. In retrospect, one can definitely say that this year is much better than the last. Some parts of it may have upset us, but you can never discount the fact that it has a lot of winning moments that made us smile and hope.

You already know the adage, “Ang ‘di lumingon sa pinanggalingan ay ‘di makararating sa paroroonan.”  So, before we move on to the next year, let’s pick up the lessons that this year has given us. The insight and moral that came with each event, no matter how big or small, should serve as our compass when we navigate the future.

Here’s a compilation of the most memorable 2021 events that left a mark in every Filipino’s life.

Let’s face the uncomfortable first: the news that stirred our emotions in a not-so-desirable way. Here are some 2021 happenings that tested not just our faith but also our unity.

In June, former President Benigno “Noynoy” Aquino III passed away at the age of 61. Apparently, he was suffering from different health conditions since 2019. Other than undergoing a heart procedure, he also underwent dialysis for at least five months.

PNoy was known for his “Daang Matuwid” battle cry. During his term, poverty incidence went down from 26.3% to 21.6%. Among the seven administrations, PNoy’s leadership recorded the lowest inflation rate.[1]

In the middle of the year, a tragedy struck the country when a Lockheed C-130 Hercules aircraft of the Philippine Air Force crashed after it attempted to land at Sulu’s Jolo Airport. It killed 53 people and injured four, making it the country’s worst aviation accident in the history of the military.[2]

Ernesto John “EJ” Obiena, a decorated pole vaulter and the sixth best in the world (men’s), was put under the spotlight after a row with the Philippine Athletics Track and Field Association (PATAFA) regarding the salary of Vitaly Petrov, his Ukrainian coach and a pole vault legend himself.

In November, letters from PATAFA that were addressed to EJ were leaked to the media. The said letters ordered EJ to return EUR 85,000 (PHP 4.8 million) to PATAFA after allegedly falsifying liquidation documents. What followed after was a series of word wars between the parties involved. The issue is yet to be resolved, but EJ has been adamant about his innocence and is fiercely defending his name and honor.

As Christmas draws closer, the southern part of the Philippines has suffered from Typhoon Odette, the strongest to hit the country this year. The death toll has already climbed to more than 300, and authorities and different organizations have expressed their worry that the real scope of damage is yet to be revealed.

Odette greatly devastated Siargao and Surigao City. It also ravaged Iloilo, Bohol, Dinagat, and Cebu, among others. Relief operations organized by the government and non-profit organizations are on-going.

If you wish to help, check out this list of channels where you can course through your donations.[3]

The Emergence of Coronavirus’ Omicron Variant

As November ends, the World Health Organization (WHO) designated the Omicron a variant of concern. This was after the said COVID-19 variant showed multiple mutations that would affect the way it would spread or its severity.

As of now, the WHO says that it isn’t clear yet whether the variant is more transmissible than other coronavirus variants such as Delta. But the organization assures the public that more studies are underway to understand Omicron’s nature.[4]

The Philippines has already recorded its third case of the Omicron variant. In light of this, the Department of Health (DOH) appeals to the public to keep wearing face masks and be mindful of health and safety protocols. The inoculation of booster shots is also on-going.

On the flip side, there are stories that gave us hope and encouraged us to believe that things would be better again. Here are some events this year that may put a smile on your face.

Lifting of the Face Shield Requirement

As trivial as it sounds, the government’s decision to remove face shields as a health and safety requirement caused a lot of Filipinos to rejoice. After all, face shields are uncomfortable to wear, especially if you’re walking under the heat of the sun. But take note that this mandate is only lifted in Alert Level 1 to 3 areas.

Showstopping Performances of Team Philippines at the 2020 Tokyo Olympics

Amid weathering a global pandemic, the Tokyo 2020 Olympics successfully pushed through. And the Philippine team made history by bringing home four medals—our biggest haul yet!

Other notable Olympic athletes include gymnast Carlos Yulo, who qualified for the vault finals, and EJ Obiena, who finished his game at 11th place in the men's pole vault event.

Beatrice Luigi Gomez’s win at the Miss Universe Philippines has been a historic one. She was the first openly bisexual Filipina to win one of the most coveted beauty titles in the country. Her victory in the Philippines qualified her for Miss Universe 2021 in Israel where she made it to the Top 5.

At the pageant, Bea showed everyone that women empowerment is one of the causes that she advocates. She cited her mom as one of her life’s main driving forces and inspirations, and she shared that she joined the Navy to help the most vulnerable communities of Cebu City, her hometown.

Read more: Holiday Pay Rules and Computation for Employers and Employees in the Philippines

The Nobel Prize is one of the most prestigious award-giving bodies in the world. It awards people who made a significant contribution to mankind in five categories: physics, chemistry, medicine or physiology, literature, and peace.

Maria Ressa, a veteran journalist, made history for being the first Filipino to win the Nobel Peace Prize and the only woman among this year’s awardees. She shared the award with Russian journalist Dmitry Muratov. Both are honored “for their efforts to safeguard freedom of expression, which is a precondition for democracy and lasting peace.”

P-Pop group SB19 has swept the Philippines off its feet with their suave vocals, smooth dance moves, and poetic and emotionally charged lyrics. Other than being wildly popular in the country, the said boy band made history as the first-ever group to dethrone BTS on Billboard’s Hot Trending Songs, a hit chart powered by Twitter. SB19’s song “Bazinga” overtook BTS’ “Butter,” which stayed number one for weeks.

Read more: The Richest K-Pop Stars: How Wealthy are They?

The Venice Film Festival is part of the Big Three in filmmaking, which is the three most prestigious film festivals in the world (with Cannes and Berlin being the other two). As such, John Arcilla’s Best Actor award at this film festival is one of the biggest things that happened in 2021.

For his work in “On The Job: Missing 8,” the Heneral Luna actor snatched the Volpi Cup Best Actor award at the 78th Venice Film Festival. This only shows that Filipinos have world-class talent.

Still on the entertainment side of things, animated series “Trese” made history by being the first-ever Filipino anime series on Netflix. “Trese” chronicles the adventures of a Pinay spirit detective Alexandra Trese, voiced by actress Liza Soberano. The series is based on the graphic novel of the same name, which was penned by writer Budjette Tan and illustrated by artist Kajo Baldisimo.

The Axie Infinity Craze in the Philippines

The blockchain-based online video game took the Philippines by storm in 2021, introducing Filipinos to the concept of cryptocurrency. Stuck in their home with their smartphone during the pandemic, Filipinos who play Axie Infinity earn income through NFTs (non-fungible tokens). The crypto game has become popular, so much so that Google named it one of the most searched games in the Philippines in 2021.[6]

Despite the misfortunes and bad news, 2021 still offered us some silver lining. Some challenges that came our way might have almost broken our spirits, but they taught us one lesson: that we can always get back on track wiser, braver, bolder, and stronger.

The pieces of wisdom that we picked up as we made our way towards the end of the year will definitely help us make 2022 a whole lot better. And hey, things are looking up! People are going out, businesses are opening again, and more people are getting vaccinated. Nonetheless, don’t let your guard down. Be vigilant and keep on observing health and safety measures to protect yourself and your family.